And as he journeyed, he came near Damascus: and suddenly there shined round about him a light from heaven:

Saul of Tarsus was a sinner. He was on his way to Damascus to round up believers and bring them bound, back to Jerusalem. It was his duty.  You might say that Saul was very zealous. He was doing what he thought was “right in his own eyes” by defending God as a Pharisee. He was a Pharisee by his own admission (Phil 3:5) - (Acts 22:2-5). This proud man now meets Jesus, the Son of God, in an event that changes his life. Saul (soon to become Paul) has just had an “awakening” that he will never forget. He is blinded by a great light there on the Damascus Road.  Saul is not so proud and powerful now, is he?

“And he fell to the earth, and heard a voice saying unto him, Saul, Saul, why persecutest thou me? And he said, Who art thou, Lord? And the Lord said, I am Jesus whom thou persecutest: it is hard for thee to kick against the pricks. And he trembling and astonished said, Lord, what wilt thou have me to do? And the Lord said unto him, Arise, and go into the city, and it shall be told thee what thou must do” (Acts 9:4-6). Saul was a man of authority who has just met One with higher authority. The highest of all authorities. Jesus Christ.  He was gripped with fear and blind, basically now helpless. His pride was shattered.  All authority has been removed from Saul.  He's nothing.

When many of us received Jesus as our Savior (John 1:12-13), oft times we received Him when our pride was gone.  As a young man and notorious sinner, I can attest that when I received Christ I was at a low point in my life. It is not for me to doubt your testimony, because that's between you and God.  However, we see some self-proclaimed Christian's walks and at times, they are not very pleasing to God.  I have met many who say they have received Jesus and never had a ‘low point’ or an “awakening”.   Again, I can’t speak for anyone else but I had several “awakenings” and events before I surrendered my life to the Lord and made Him Lord of my life.   I hear of men speaking of their “Damascus Road Experience” but seemingly, they never come out from this world. It may be because of status, position, or popularity.  I don’t know.  They live the same life they lived beforehand.  There is NO Change in them.  Personally, the “awakenings” in my life caused me to repent and give it all up for Christ.

I was not saved at the awakenings, that came later.  But quickly, I “came out from among them”.  Almost  immediately, I hated my old ways. Saul, henceforth Paul, did not eat for three days at the house of Judas, and when Ananias arrived and touched Paul, his sight was restored. “And Ananias went his way, and entered into the house; and putting his hands on him said, Brother Saul, the Lord, even Jesus, that appeared unto thee in the way as thou camest, hath sent me, that thou mightest receive thy sight, and be filled with the Holy Ghost. And immediately there fell from his eyes as it had been scales: and he received sight forthwith, and arose, and was baptized” (Acts 9:17-18).

It was at this time when Paul received Christ with the help of an obedient servant, Ananias. His first order of business was baptism.  On a side note: If one isn’t willing to be baptized, then there may be a problem with his or her salvation.  Baptism is not for the purpose of salvation, but for Paul it was his willingness to identify himself with Jesus Christ, our Lord. Paul “came out from among them” (2 Cor 6:17) which means he ‘repented’, or turned from his ways. The Bible reads in (2 Cor 6:18): “And will be a Father unto you, and ye shall be my sons and daughters, saith the Lord Almighty”. Wow. What an honor and privilege!  As 'born again' believers we are sons and daughters of the Most High God. 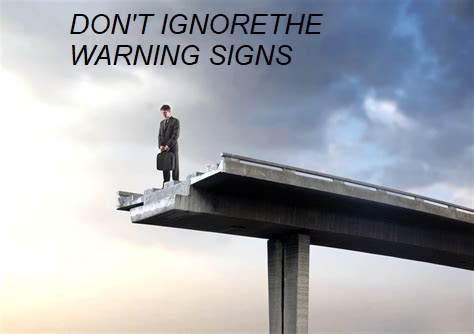 My friend, wouldn’t be great if you didn’t have to experience a terrible awakening or an event similar to the Apostle Paul's?  Think about this brief scenario. A truck is roaring down the highway at a high rate of speed in the middle of the night. The driver sees a sign that says “Bridge Out”. What if the driver ignores that sign and continues on that same road at the same rate of speed?  Foolish isn’t  it? The operator of the truck ignored the warning sign and is now about to have an awakening. Now if the driver heeded the warning sign, he will not go through the “awakening” that awaits him. Here is a warning from God’s word, the Bible. “As it is appointed unto men once to die; then after this the judgment” (Heb 9:27). We all have an appointment with death. Jesus said “except ye repent, ye shall all likewise perish” (Lk 13:3). That is a warning from our Lord Jesus.

Have you seen any warning signs in your life?  Have you had an awakening in the past and have not acted upon it?  You may be coming up on another awakening in your life. Watch for the warning signs. God loves you and He is not willing for you to perish. “The Lord is not slack concerning his promise, as some men count slackness; but is longsuffering to us-ward, not willing that any should perish, but that all should come to repentance” (2 Pet 3:9).

If you have had a warning or possibly even an “awakening” please do not ignore it.  This may be your last chance. Call upon the Lord where you sit. “That if thou shalt confess with thy mouth the Lord Jesus, and shalt believe in thine heart that God hath raised him from the dead, thou shalt be saved. For with the heart man believeth unto righteousness; and with the mouth confession is made unto salvation” (Rom 10:9-10). He’s waiting (Rev 3:20).  Remember, God wants none to perish.

1 Corinthians 6:19-20“What? know ye not that your body is the temple of the Holy Ghost which is in you, which ye have of God, and ye are not your own? For ye are bought with a price: therefore glorify God in your body, and in your spirit, which are God's.”