Give unto the LORD the glory due unto His name;

Let us come before his presence with thanksgiving, and make a joyful noise unto him with psalms (Ps 95:2). 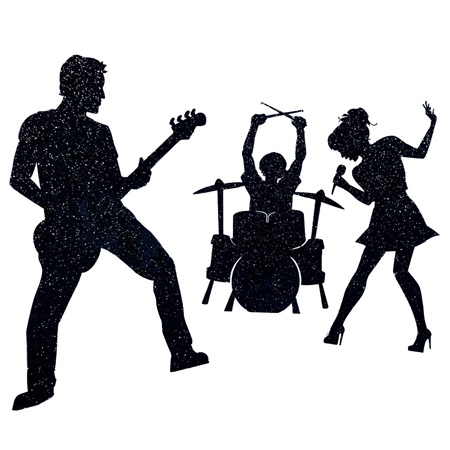 Music is dividing many churches today. From an array of electrical instruments to back up singers in spangly dresses to a "worship leader" whose feet will leave the ground periodically.  Some song leaders will try to force congregations to wave their hands, laugh, and shout (even though some might have had some tragic events in their lives the past week).  I have witnessed a lot of "entertainment" in an effort to bring young people into the church.  Many in the younger generations are not interested in old hymns and want to hear the more “upbeat and ear-pounding” music because that is what they know and hear in this world. Many parents are not teaching children about any of the sacred old hymns because they are not familiar with these hymns themselves. I am wondering of King Saul : Would his soul have been soothed if David played an electric guitar or wildly have beaten a snare drum (my thoughts)? Both sides can come up with many reasons why “their” music is “right” or “correct” for church service and worship. It is not my intention to get into a music battle with anyone but I adjure you to at least sit down in a quiet place and read the words of several of the classic hymns. I truly believe if one didn’t have a Bible but yet read through some of the songs in an older hymnal, they would call out to Christ for salvation. Again, thinking out loud.

Let me share with you just 3 examples out of thousands of hymns.

It is well with my soul – Horatio G Spafford

Spafford was a devout church member and elder and a prominent attorney in 1870s who lost all of his holdings during the great Chicago fire. With what little he had left, he sent his wife, Anna, and four young daughters (18 months to 12 years old) on a trip to England to be with relatives and to relieve some of the stress in their lives. He was to join them in two weeks on another vessel.  During the voyage, the ship that Anna was on collided with another ship, the Loch Earn, and her rapidly sank in the frigid sea. The (3) three older girls, disappeared in the waters and eventually the baby of 18 months, was washed from her mother’s arms also. Alone and near death, she was rescued and plucked from the sea. When arriving in London and meeting their close friend Dwight L Moody, she telegraphed her husband with these words: “Saved, alone.”  When Horatio sailed to be with her the ship’s captain pointed out that “this is the place where the tragedy happened.” With all that had happened to him, he was able to pen the words “It Is Well With My Soul,” knowing that God was the only One he could turn to.

Here is verse 2 of the Hymn: ♪ “Tho satan should buffet, tho trials should come, Let blessed assurance control. That Christ has regarded my helpless estate, and hath shed His own blood for my soul  ♪♪.”  Through it all, Spafford honored the Lord.

Spafford was very familiar with this verse:  God is our refuge and strength, a very present help in trouble. Therefore will not we fear, though the earth be removed, and though the mountains be carried into the midst of the sea; Though the waters thereof roar and be troubled, though the mountains shake with the swelling thereof. Selah. Ps 46:1-3

Many of the older hymn writers, experienced pain and suffering but still knew to ‘Praise and worship through adversity’ and always glorified God – that’s Faith.

Newton was born in 1725 to a Christian woman and a ship’s captain. After his mother died when he was 7, he was taken in by distant relatives and was mocked for his belief in God. They discouraged him from praying and ridiculed him for his young faith. At age 11 he ran off and became an apprentice on his father’s ship but learned all the wrong things. He became an immoral man drinking and carrying on in sinful ways. He signed on with a slave ship but ended up being controlled by the owner’s vindictive wife who had him imprisoned as one of the slaves, beat him, and forced him to eat his food on the floor like a dog. He escaped to another ship from the West Africa forests and became basically another low hand on a different ship. He was intoxicated one night and fell overboard and the crew “harpooned” him in the thigh to rescue him. During that era he also served on a British vessel for a short time.

Somehow, a copy of Thomas A Kempis book, “Imitation of Christ” fell into his hands. He recalled his mother’s teachings as a young child and that started turning his heart to Christ. As the slave ship he was on reached the Scotland shores, the boat began to take on water and it looked like all would perish including the slaves who were on board. Every able bodied man bailed water from the foundering ship and he realized that it was God’s grace that saved him – nothing else. Newton wanted no part of being a deck hand any longer and especially working on a slave ship.  He made it back to England and had a miraculous conversion to Christ.  Newton surrendered his life to Jesus Christ and repented from his sinful and shameful lifestyle.  Being eternally grateful to Jesus Christ, who was willing to die for a wicked and sinful man, his desire was to serve the Lord for the rest of his life.  I know that feeling myself. Thank You Jesus.  Newton met and married a Godly woman and became a minister who preached God’s word.  He became an abolitionist for the rest of his life. Amazing Grace is a hymn that has meant so much to millions of people.  Newton went on to compose over 280 hymns. “Amazing grace, how sweet the sound; That saved a wretch like me.”  Multitudes can identify with these words - possibly you and I.

After a ‘so called country doctor’ applied a mustard poultice because of a slight eye problem Fanny Crosby was blinded at the age of three (3). Her father died shortly after that.  Crosby was a Christian at an early age.  At 38 she married and lost her only child in infancy. She was married for 25 years and her husband passed away and she lived another 32 years. Through all of her life, she was never bitter or discouraged because of her solid faith in Christ and was led to pen over 9000 hymns. All for His glory. Her first poem was written at eight (8) years old.

Oh, what a happy soul am I, Although I cannot see,

I am resolved that in this world, Contented I will be.

How many blessings I enjoy, that other people don’t!

To weep and sigh because I’m blind, I cannot and I won’t!

She truly had tremendous faith.  She wrote for the American Sunday School under William Bradbury and although she had written a few secular songs, she was challenged by Bradbury to write Christian songs for the rest of her life. She definitely met that challenge. Blessed Assurance is a favorite of millions over the past century. “This is my story, this is my song. Praising my Savior, all the day long:”  She wrote "Pass me not," "Nearer the cross," "He hideth my soul," and thousands more.

Praise God that Fanny Crosby's eyesight has been restored.

Many (not all) of today’s praise and worship songs sound very similar to secular rock music. Or Worldly music – it resembles entertainment.  Many times this music will move one's human emotions, but without meaning, it won’t touch one's soul.  We should ask ourselves, “how does this glorify God?”  Many may have doubt. I ask you again, does this music “worship God in the beauty of holiness?”  Take it to the Lord in prayer.  We can all learn something from our talented Brothers and Sisters who have 'went on' before us.

As I have searched through the hymnals over the decades, I read the words to the hymns that people wrote in trying times and tragedies.  They were still able to glorify God. Our purpose on earth is to glorify God.  Reading a book once by a popular Christian author, who made a lot of money, he tried to explain our purpose in life.  It actually could all be summed up within this verse. 1 Cor 6:20  For ye are bought with a price: therefore glorify God in your body, and in your spirit, which are God's. The writer could have saved a lot of breath and time by memorizing that verse.  The Bible explains this.

'Whether or not you agree with me on the “old hymns,” that’s okay.' I simply wanted to share with you some of the background of some older hymns. Most all of the hymns indicate to the reader, that God is faithful and just and He is worthy to be praised and glorified. The ‘old hymns’ do have special meaning to many Christians.  Many proponents of new and upbeat worship music use several verses in the Psalms to support their worship music.  One can use the verse of  Ps 95:2, to make a joyful noise. It actually appears around 30 times in the Bible.  I agree to make a joyful noise, but just as a reminder, music was also used at times to worship false gods and idols.

The Chaldeans and other leaders came to King Nebuchadnezzar and said, "Thou, O king, hast made a decree, that every man that shall hear the sound of the cornet, flute, harp, sackbut, psaltery, and dulcimer, and all kinds of music, shall fall down and worship the golden image: And whoso falleth not down and worshippeth, that he should be cast into the midst of a burning fiery furnace"  (Dan 3:10-11).  (Soon after this Shadrach, Meshach, and Abednego were thrown into the fiery furnace for not worshiping the golden image).  Note: The idol worshipers were also making "joyful noises" in their view.

John 10:14-15“I am the good shepherd, and know my sheep, and am known of mine. As the Father knoweth me, even so know I the Father: and I lay down my life for the sheep.”