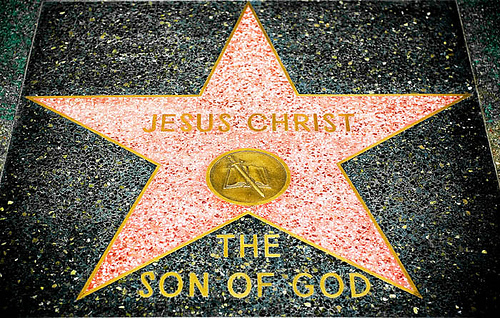 But these are written, that ye might believe that Jesus is the Christ, the Son of God; and that believing ye might have life through his name   (John 20:31).

As they shuffle down the sidewalks, they come from near and far
They’re looking for their heroes’ names, poured on the walk of stars.
They recall exactly where they were, from the movies they had seen.
Oh what grand excitement, when they watched on that big screen.

The Duke, and Katherine Hepburn, Errol Flynn and many more,
They gaze upon, and touch the stars, as if on the Golden Shore.
They smiled, and laughed and cried at times, and pined when e’er they passed,
And wished they’d lived a thousand years, and maybe cross their paths.

Such great esteem, they held for them, and all their fancy cars,
They’ll tour their homes, where they lived, and film their pristine yards.
And then they’ll all remember, of the awards and accolades,
Their heroes humbly accepted, back in their Hollywood days.

But yet someone’s name is missing, in Hollywood all the years,
One overlooked, and laughed at, among Tinsel-town’s great careers.
He never had ‘walk on’ , nor received a great award,
Yet He was the greatest in all the world, but no star for Him was poured.

Jesus Christ, the Son of God, around the world His name is known.
He healed the sick, and raised the dead, and now sits upon His throne.
He gave His life on Calvary, and rose again, for mankind’s sins,
But strolling up and down the ‘walk’, you’ll see no star for Him.

If Jesus ever had a star, on Hollywood’s great walk of fame,
We know the filth of Tinsel Town, would cease, and all be shamed.
He’d preach to them in their fancy clothes, “repent or perish” sinners,
On bended knee, with repentant hearts, they’d forget their fancy dinners.

If the actors all knew Jesus, the filthy sex scenes, they would end
They’d all get jobs, and live for Him, instead of the world where they pretend.
They’d be examples for our youth, and instruct in righteousness,
Instead of nasty mouths and movies, that make our kids a mess.

If Jesus ever had a star, His name wouldn’t be blasphemed.
But since Christ will have no part in sin, there’s no star for all to see.
Christ’s star is up in heaven; where He sits upon His throne,
We’ll see it soon, when He comes back, to take us to, our heavenly home.

“And as they went on their way, they came unto a certain water: and the eunuch said, See, here is water; what doth hinder me to be baptized?

And Philip said, If thou believest with all thine heart, thou mayest. And he answered and said, I believe that Jesus Christ is the Son of God”

Indeed He is the 'Star of Bethlehem'

Hebrews 4:12“For the word of God is quick, and powerful, and sharper than any twoedged sword, piercing even to the dividing asunder of soul and spirit, and of the joints and marrow, and is a discerner of the thoughts and intents of the heart.”