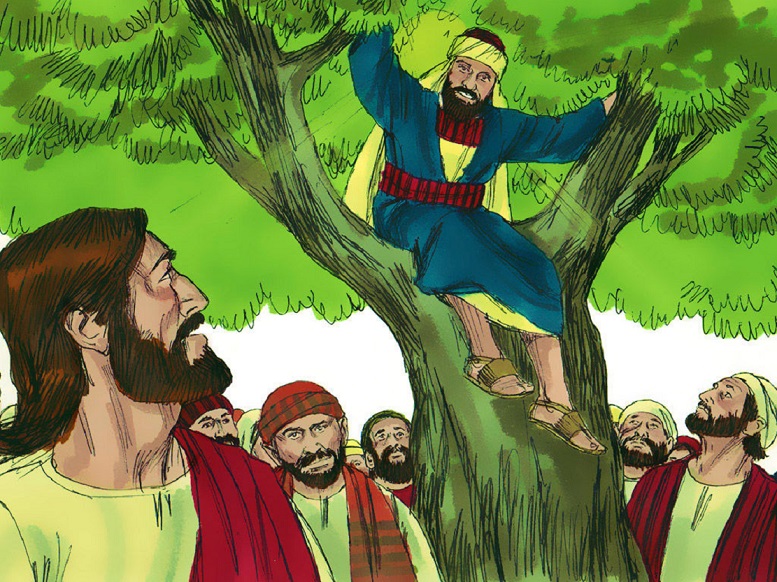 And a certain ruler asked him, saying, Good Master, what shall I do to inherit eternal life? Luke 18:18

In Luke 18:18 we see Jesus talking to a rich young ruler and challenged him to sell everything that he had and give to the poor and then come follow Him. But the young, rich man couldn’t do it because he was very rich. Luke 18:23 says that he became so sorrowful. And then in verses Luke 18:24-28, Jesus says: (Read these scriptures) And when Jesus saw that he was very sorrowful, he said, How hardly shall they that have riches enter into the kingdom of God!

In Luke 18:32, Jesus said that He would be delivered to the Gentiles, would be mocked and insulted and spit on. He said that they will scourge Him and put Him to death and on the third day He will rise again.  Jesus knew what lay ahead of Him in Jerusalem. He knew what He was going to go through and the pain and suffering that He was going to go through. Jesus didn’t try to get out of going to the cross. He went right into Jerusalem because He knew His death was necessary in order for us to be saved.

As we get into chapter 19 we see how Jesus brought hope to a tax collector named Zacchaeus. Israel at this time was under Roman control. The Romans placed heavy taxes on the people under their control to finance their world empire. Of course the Jews opposed these taxes because they went toward the support of the Roman government and its pagan gods. But they were required to pay the taxes. Zacchaeus was one of these tax collectors working for the Roman government.

Zacchaeus was looked on as a sinner by the Pharisees. But this story about the salvation of Zacchaeus is a good example of how Jesus came to seek and save the lost. As we look at this story, Jesus had just crossed the Jordan River and entered into Jericho. He was on His way to Jerusalem for the last time. Verse 1 says that He entered Jericho and passed through. To me, this sounds like Jesus had come to Jericho and He had already passed through or He was passing through and coming to the outskirts of the town when He had encountered Zacchaeus.

Jericho was an important city situated in the valley of the Jordan west of the river near the Dead Sea. It is about 3000 feet lower that the city of Jerusalem. It was known as the city of palm trees. It was first mentioned in scripture when the Israelites were camped at Shittim. From there Joshua sent spies to check out the city to see how fortified it was and what their defenses were.

Jericho is where Zacchaeus lived and made his living collecting taxes for the Roman government. Zacchaeus was the chief tax collector and it says that he was rich. And because he was rich it kind of made him an unlikely candidate to follow Jesus because we see in chapter 18 how hard it is for a rich man to give up all of his riches to follow Jesus.

As Jesus was passing through Jericho the streets were crowded with people and Zacchaeus wanted to see Jesus but because he was so short, he couldn’t see over the people. He was probably standing on his tip toes, maybe jumping up and down but he was still too short to see. Zacchaeus really wanted to see Jesus. Maybe he had heard the stories of healing that Jesus had done. Maybe he was just curious to see who this Man named Jesus was. Maybe he heard about Jesus preaching about salvation and he wanted to know more about it.

Sometimes we look at God to show us great things and we miss the small things that He is showing us. Here God used a small man, big in the Roman government as the chief tax collector but small in size. Maybe Zacchaeus was anxious to see Jesus because he wasn’t happy with his life of tax collecting. Maybe he wasn’t happy about ripping people off by collecting more taxes than they owed. Maybe he heard the Jesus had a better way of life and he was seeking it. In our community and around the country, there are a lot of people that have tried drugs, alcohol and a lot of other things and then, maybe they find out how meaningless these things are and they start seeking something better. Maybe they start thinking that there has got to be something more to life than this. And then, maybe they start searching.

Zacchaeus had all the riches but something was missing. Whatever the reason, he wanted to see Jesus. But he was too short to see over the crowds. So what does he do? He climbs a Sycamore tree. As Jesus was going through town, He came to the tree that Zacchaeus was in and He stops and looks up and says, “Zacchaeus, come down from there, I need to stay at your house today. Can you imagine how he must have felt? Of all the people in the crowd, Jesus called him. Jesus said make haste and come down. Come quickly, hurry up, right away.”

Jesus didn’t say, “Zacchaeus, you’re a sinner, you’ve mistreated people, you’ve ripped them off.” Jesus spoke to him with words of kindness. Can you imagine how excited Zacchaeus must have been when Jesus called him to come down?  You could just hear the leaves rustling in the tree and maybe the branches cracking. He was overjoyed when Jesus said the He was going to spend the day at his house. The was probably the first time in a long time that Zacchaeus heard any kind of word from anyone. I’m sure that nobody else in town had a kind word for him.

Reminds me of a little child that just got scolded and they are sitting on the floor with a long sad face and someone comes along and gives them a gift or a piece of candy and you can just see their face change from sadness to big smiles of joy.

Luke 19:6 says that when he had come down he received Jesus joyfully. He responded to the call of Jesus and they went off to his house. It also says, “But when they saw it, the all complained saying, He has gone to be a guest with a man that is a sinner.” If it wasn’t for Jesus going to the house of sinners, none of us would be saved. For some of us, He has knocked on the door of our hearts for a long time. The people just couldn’t understand how Jesus could go into the house of such a bad sinner.

Jesus has a heart for people like Zacchaeus that are lost. God’s salvation is offered to all people. If you feel Him knocking at the door of your heart today, open up and let Him in.

Scripture doesn’t tell us what Jesus had said to Zacchaeus when they got to his home, but whatever it was it made a great change in Zacchaeus. On the other hand where the rich young ruler in Luke 18:8 went away sad because he couldn’t give up his riches, but here Zacchaeus was willing to give up half of his riches and with the rest, give back fourfold to those that he had cheated.

V. 9; (lK 19:9) Zacchaeus became a follower of Jesus Christ that day. He repented of his sins and made restitution for his wrong doings. Zacchaeus had to climb a tree to get a good look at Jesus but he got a better look when his spiritual eyes were opened.

V. 10; One of the greatest verses to this section of scripture. “For the Son of man has come to seek and save the lost.” We see that nobody is too bad to be saved. Jesus has compassion on all people and no one is beyond the reach of God’s grace. A born again believer will always live a life completely different from their life before coming to know Jesus, like Zacchaeus said in Verse 8. Now, instead of taking from the people, he is now giving back.

Zacchaeus didn’t know that when Jesus was going through Jericho that it would be His last trip to Jerusalem. If Zacchaeus didn’t run ahead of the crowds, if he didn’t climb that tree he would have missed the greatest experience of his life. The one that changed his life forever.

Too many times in life we put things off. We might have something to do outside and we put if off until tomorrow because we’re too tired, and we wake up the next day to find out that it’s raining or snowing and we feel bad because we should have had it done.

Too many time Jesus is calling and people put it off. I’ll do it tomorrow, I have a plenty of time, I’ll wait until I’m older. Tomorrow might be too late. If you feel Jesus calling you, don’t wait. You might not have another chance. Today is the day of salvation (2 Cor 6:2).

Hebrews 1:1-2“God, who at sundry times and in divers manners spake in time past unto the fathers by the prophets, Hath in these last days spoken unto us by his Son, whom he hath appointed heir of all things, by whom also he made the worlds;”